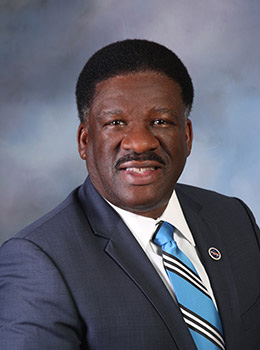 Throughout his quarter century career at NASA, Robinson has held multiple positions – some at the same time, such as when he was Chief of the Risk Management Office and the on-site Director for the NASA Assurance Technology Center (ATC), the predecessor to the new NASA Safety Center. He has also been Project Manager for the Thermal Energy Storage Reflight Experiment 2, which was launched on the Endeavor Shuttle in January 1996. His engineering team designed, developed, and tested hardware and software to provide data for understanding the long duration microgravity behavior of thermal energy storage lithium-fluoride salts that undergo repeated melting and freezing cycles. Another position he held was as Electrical, Electronic, and Electromagnetic (EEE) parts manager for the International Space Station’s Electrical Power System.

He has received many awards from NASA including the Exceptional Service Honor Award Medal, the Equal Employment Opportunity Medal, and the Special Achievement Award. In 2009, he was given the Black Engineer of the year Award in Professional Achievement in Government. Robinson also holds the Space Flight Awareness Honoree Award, the James C. Jones Humanitarian Award, the USDA Graduate Leadership Academy’s Community Service Award, the Outstanding Young Men of America Award, and the YMCA’s President’s Award for Leadership and Service. He is an inductee into his John F. Kennedy High School’s Gallery of Excellence.

Robinson is active in the community. He is a past president of the National Technical Association and the founding chairperson of the Consortium of African American Organizations in Cleveland, Ohio. Robinson is also a co-founder of the New Approach to Self-Achievement (NASA) Project, which is a career awareness program for inner-city youth focused on science, technology, engineering and math (STEM) fields.

Since 2007, Knots4Kids has stood with young men and their families to assist in their journey from boyhood to manhood.